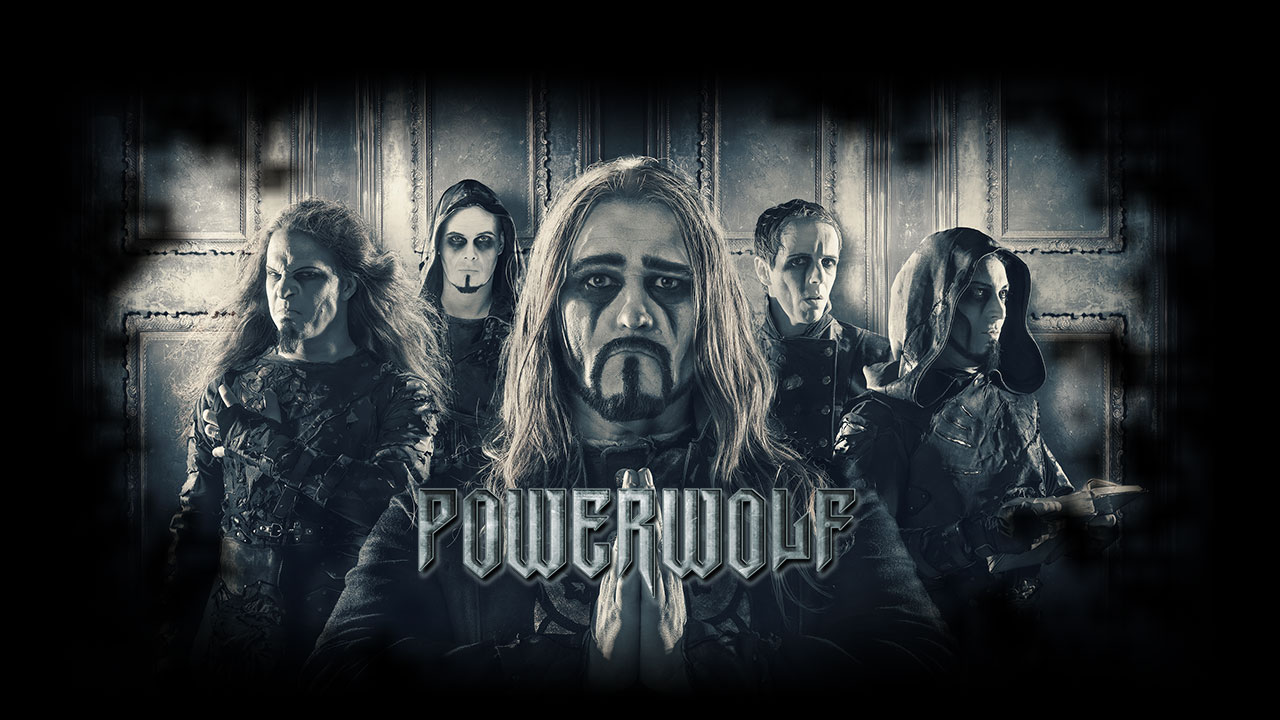 Powerwolf was formed in 2003. The brothers Matthew (lead and rhythm guitar) and Charles Greywolf (bass, rhythmen guitar) were the first members and later the Rumanian singer Attila Dorn joined them. Now, Roeal van Helden (drums) and Falk M. Schlegel (organ) also belong to the current cast.
The dominate language of the power-metal songs is English but there are also Latin and some German lyrics. The content of the songs is affected by religion and old Rumanian saga. However, the musicians don´t talk about themselves as a religious band but as a spiritual.

In 2005 their debut album “Return in Bloodred“ was released, followed by an European tour and lots of festivals performances. In 2007 the second album “Lupus Die“ was released and then there was another tour through Europe. In 2008 Powerwolf was on tour with different artists and later in 2009 the third album “Bible of the beast” was released. This masterpiece demonstrates that Powerwolf is said to be one of the most outstanding acts of today’s European heavy metal scene.

Infamous for their live shows, the wolves embarked on a tour soon after the release of “Bible Of The Beast”, starting with celebrated festival appearances, before playing a headlining tour in autumn, which lead them through Germany, Benelux and Switzerland. To give the growing crowd of followers more opportunities to attend the metal mass, in 2010 Powerwolf were part of the Metal Fest tour, also leading them to countries like Czech Republic and Hungary, before crowning their touring activities with a celebrated appearance as headliner of the 2nd stage at UKs Bloodstock Festival.

In 2011 the wolves are back with “Blood Of The Saints”. The new album title itself is a sign that the wolves stayed true to themselves; the lyrical concept once again refers to biblical parables. The production was very special: Besides using no less than five different studios and a church, they recorded the classical choir parts in a historical church from the 13th century. “The sound of 40 classically trained men and women singing in a church is unique. This can’t be simulated in any studio.” And indeed – “Blood Of The Saints” entered the German album charts for about three weeks.
In 2012 –after some top-class festivals– the band went on “Power Of Metal Tour“ together with the artists Sabaton, Grave Digger and Skullfist.

Preachers Of The Night

In July 2013 „Preachers Of The Night“ was released: A truly catchy and intense album – furious, epic, heavy und wolfish up to the max!
Speaking of „wolfish“: Their musical style is not the only aspect that makes Powerwolf truly unique. The band presents a strong contextual and visual concept that perfectly enframed their music. This includes the lyrics, which are spiked with puns, continues with the artworks und won’t end with their lavish and opulently equipped stage shows and the somber look of all band members.

Powerwolf were booked for Festivals such as Wacken, Summer Breeze, Metal Days, Masters Of Rock and in autumn they rocked the “Wolfsnächte tour”.

A world full of wolves

2014 you could see the band “all over the world”. And they had a really good reason to celebrate: 10th anniversary! Also on this occasion Powerwolf released a two-part luxurious anniversary box.
The metal community of Germany´s Metal Hammer voted the band as „Climber of the Year“. 2015 – the success story continued: The sixth album „Blessed & Possessed“ conquered the Top 3 of the German Album Charts! Powerwolf and their fans celebrated this all together on the festivals and the Europe “Wolfsnächste Tour 2015”. In the following year the band convinced on stage and their first live DVD/ CD “The Metal Mass – Live”! The CD entered the German album charts at a great #4 and the DVD conquered the German DVD Charts, debuting at #1. The band was delighted – but there was no reason to relax. Powerwolf went on tour again – and also in the following year.

Demons are a girl’s best friend is the name of the single, which has been out since May 2018 and less than 2 months later already had over 2 million hits on YouTube. The album “The Sacrament of Sin” was released in July 2018 and promptly reached the top of the German album charts.

Call of the wild

Following their highly successful Best Of album “Best of the blessed”, released in 2020, the gold and platinum award winners have now announced the follow-up to their 2018 number 1 studio album forJuly 2021. The holy mass of heavy metal will be titled “Call of the wild” and will be released via Napalm Records. In October 2022, the single “My will be done” was released.