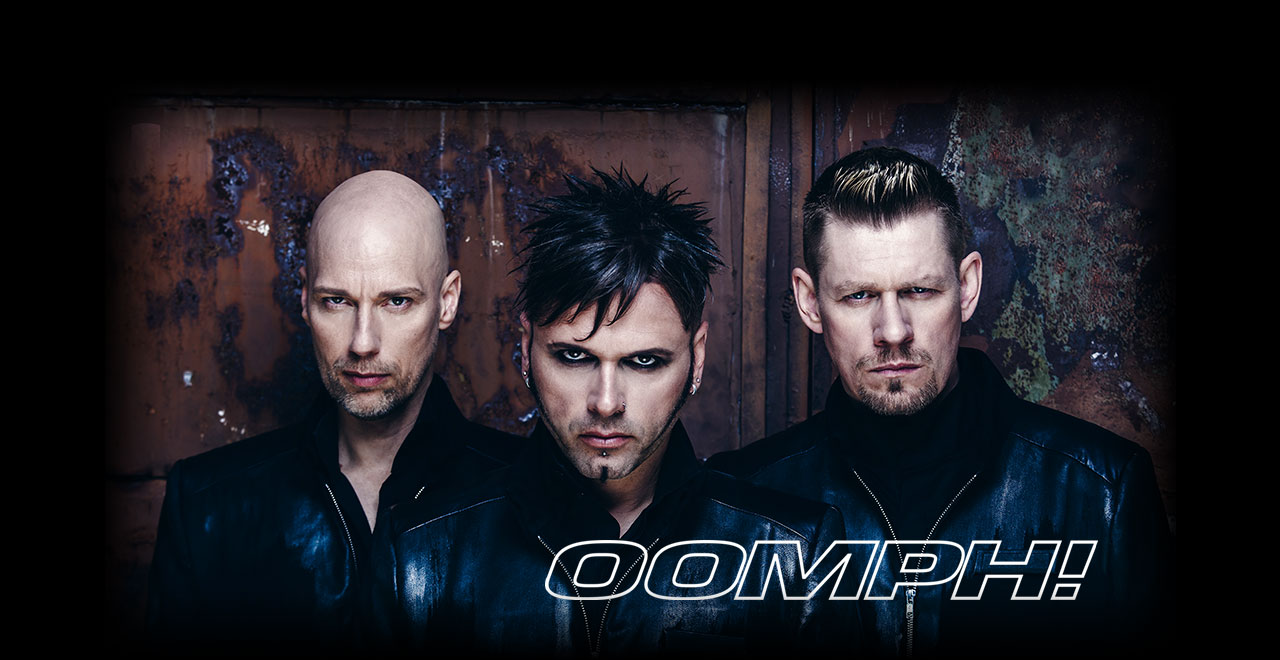 In 1989 Dero, Flux and Crap founded the band Oomph!
Wherefrom does that name come? The musicians read this special word in an old English dictionary and it means something like “extraordinary”, “full of energy” or “pep”.

And it fits! That´s not only our opinion – since the foundation the band has reached a lot: Many singles and albums have been released and Oomph! has won awards like “The golden disc” in Germany and Austria for the single “Augen auf” or the award for “The Best Band” from “1 Live Krone 2004”. In 2007 Oomph! and Marta Jandová (singer of our endorser “Die Happy“) were the winners of the 3rd “Bundesvision Song Contest”.

With their lyrics the band demonstrates that they give thoughts to a lot of political and socio-critical things and that they also like to criticize. According to their own statements they don´t hesitate to hold a mirror up to the society. So they want to make people think. But due to this they cause attention and also some scandals. But lots of hits and great chart positions prove that much people love Oomph! and of course their music.

Since the beginning of 2012 the band belongs to the König & Meyer endorsement partners. In the same year Oomph! was our star-guest at the Musikmesse Frankfurt! They signed great posters at our main booth.
Also in 2012 the new album “Der Wahnsinns fette Beute” was released and the band went on the homonymous tour.
The musicians were guests on serveral festivals and of course stars in their own concerts.

2015: OOMPH! celebrated their 25th birthday! Of course there was an anniversary album with the matching title “XXV”. 14 new songs full of dark poetry, criticism of society and religion – but also words of salvation, love and death. So besides hard metal songs there are also lots of emotional tracks. Dero: “Never before we have been so close to our own spiritual abyss”. Well it really seemed to be the most personal album of their carrer. Success proved them right – Congratulation!
Since the release of the new album OOMPH! has been touring all over the world: Germay, Russia, Belgium, France, Spain, Mexico….

The current album “Ritual” was released at the beginning of 2019 and for the first time an Oomph! album entered the German album charts directly at number 1 – and stayed there for 8 weeks.
After the extensive European tour in March, the band even went to Russia and the ancient Ukraine. In summer Oomph! announced an extension of the Ritual Tour with new dates in Germany.
In early 2020 the band received the “Silver YouTube Creator Award” for 100.000 subscribers on their YouTube channel. Congratulations!

In October 2021 the band announced this surprising and sad news:

“After/Since September 30, 2021, ‘Dero’ is no longer part of the band Oomph! All three of us regret that we have not managed to keep the band in this constellation despite our best efforts. We have mutually agreed that ‘Flux’ and ‘Crap’ will continue to lead the band Oomph! and wish each other all the best for the future!”